As a result of building something for Red Bull’s Creation contest a team consisting of Jeff Waeglin, Chris Horne, Justin Griggs and Greg Needel (me) Built the “Pour Master Pro.” The intention of this robot is to pour a perfect beer in any size glass automatically.

As part of the contest we had to make a video, while it is not great in terms of cinematography, I think it does a good job describing how the machine works. 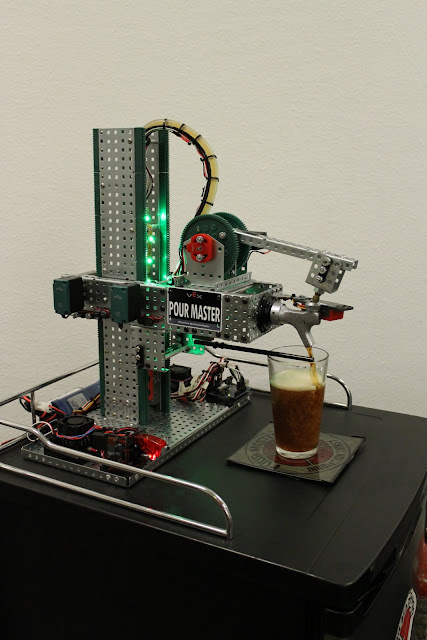 Our creation is a reinvention of beer pouring and bar tending. Built in only four days, the Pour Master Pro completely automating the pouring process. Just place a glass on the logo and your beer is poured. Almost any sized glass can be used, from a small coffee cup up to a full sized pitcher. The Pour Master Pro makes a perfect pour, every pour.

The Pour Master Pro stores beer in a standard kegerator, keeping a 15.5 gallon keg cold at all times and allowing for easy changes.

A powered carriage mounted on top of the kegerator travels on a rack and pinion to detect the height of the glass. At the end of the carriage sits a standard beer tap, powered by a geared motor, to pour beer. A potentiometer mounted on the tap allows the Arduino to know if the tap is open or closed.A limit switch is mounted on the underside of the carriage to detect when the edge of a glass is near the tap as it travels down.

Two ultrasonic sensors are mounted on the tower. The first is mounted vertically at the base of the tower and is used to detect the presence of a glass. The second sensor is mounted on the carriage next to the tap and faces downward into the glass. As beer is poured, the sensor reads how close the beer is to the tap.

The tower motors and its sensors are controlled and monitored by an Arduino Duemilanove. A finite state machine is used to determine what the tower should do and what should happen next. Custom software to interface the ultrasonic sensors and the speed controllers is needed to supplement the Arduino libraries. Error handling is accomplished by continuously monitoring the sensors to ensure the system is in the proper state.

RGB LEDs mounted in the tower allow the user to know when a glass is detected and when the process is finished. An LCD near the Arduino provides additional information to the user such as status and error codes.

You can also view the gallery of photos for the project. Here