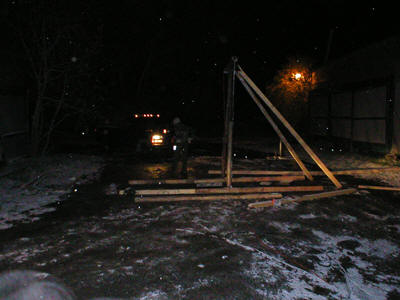 Objective: Throw a 5 lb pumpkin at least 250 ft and get closest to a set target at that distance.

Overview: In honor of Halloween, RIT held a pumpkin throwing competition. The rules were simple: a 5 lb pumpkin had to be thrown a distance of at least 250 feet. A few friends and I decided that we were going to take on the challenge and build a Trebuchet. We determined that we wanted to go for the greatest distance, rather than try for accuracy.

Results: Our trebuchet measured 25 feet from the ground to the top of the throwing arm while it was at rest, and was able to throw a 5 lb pumpkin 575 feet without being tuned properly. We were able to make 2 good shots, but on our 3rd the counter weight shifted and broke one of our wooden support beams. This beam break caused the whole machine to topple over. We received the awards for “longest distance” and “Most Original Design”

Current status: ~85% of the machine was made from steel, which was undamaged in the accident. The rest of the machine was rebuilt and currently resides in one of the team member’s back yards, acting as a great conversation starter. The competition takes place every year but this machine has not competed since 2002 due to the effort required for disassembling, transporting and then reassembling.