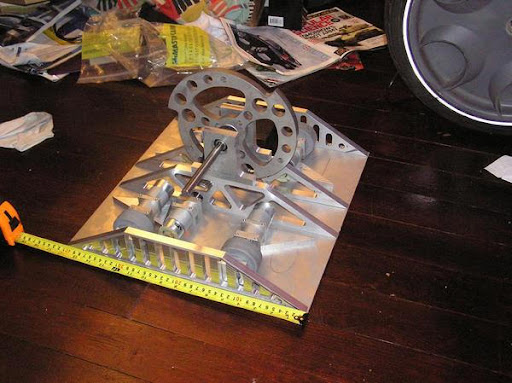 Objective: To create a 30 lb combat robot which is easily transportable and has the ability to fight at more events.

Overview: After building Tetracide a year earlier I learned that there were more events for smaller robots to compete. This and the fact that there was a fight close to my location sparked the desire to build a small robot. The new robot would use a spinning weapon and utilize my access to CNC machines at work. I designed and built the entire thing during a 17 day time period.

Results: Building and designing the robot itself was a success, and I competed in the “Pound of Pain” event in Nashua, NH. Overall the performance of the robot was to my expectations but due to lack of testing time and radio problems it did not fare well at the event. I finished the event in 4th place (again) and once again returned home with a fully working robot.

Current status: This robot is on my workbench waiting for a few small fixes to get it up and running again. I have been debating taking the parts from it to build another robot with a larger weapon motor and better attack strategy. This robot is on the back burner until I find out about a competition close by which will give me the drive to work on it again. PSC will fight again in some fashion.