I have spent more time then I thought I would in the past week reflecting on the event, how my team performed and the experience in general.

It is hard for me to put into words the different emotions that this event brought on. If you would have asked be prior to the event if I felt that this would be a “life changer” the answer would have been without a doubt no. While looking back on it I believe that is exactly what happened.

Before I go into my personal reflections a de-brief for those who weren’t there is probably the right way to start.

The event was a build challenge where we had to build something to move a person. We decided early on that we wanted to “go big or go home” The latter turned out to be true. For my robot Folks, we attempted to build a 6foot x 8foot, 1000lb swerve drive with a playground on top. The fact that we were able to build this in 72 hours is still shocking to me. Although we finished our plan and were able to build a cool device we were lacking those extra few hours of tweaking required to make it a show stopper. We literally finished the wiring and fabrication as the time hit zero in a what hopefully will be some dramatic TV. Immediately following the completion we had to put our creations on trucks to go over to the public part of Red Bull creation. During this event we did a public showing of our semi-functional device and then immediately following the event cut our creation into pieces. We were told information which turned out to be false about them trashing creations that were not dealt with immediately. The P^3 (play powered pod) is gone but the front and back modules are in storage so we could re-build it, still a week later we are deciding the fate of the remains of our creation. 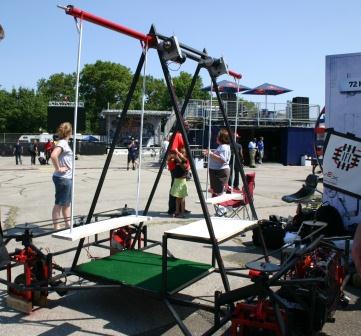 From a build point of view what we did could (and probably should) be considered a failure. We didn’t win or place and with such high expectations that we set for ourselves going into the event it is hard to look at it from any other perspective. On the flip side I got much more than a piece of hardware and some cash from the event. I learned that there are many communities beyond robotics that look at things the same way that we do. The cooperation and willingness to help between the teams was all there and many friends were made. Additionally the build allowed me to push myself in a way that I haven’t done in a long time (while FIRST robots are a challenge it is a different time period and different skill set). Josh from IEEE Spectrum Magazine was following us during the build and put together a nice video talking about the competition featuring us.

So as I eluded to I consider this event to be a life changer for me. For the longest time I have found myself to be stuck in a routine that doesn’t involve thinking creatively outside of work, or trying to personally improve myself. My whole life growing up I was constantly trying to push myself to be more than I am in many ways. I used to try to live outside of my comfort zone, because that is where you can explore your true potential. Too many people (myself included these past few years) are just satisfied with the status quo, accepting reality for what it is and not what it could be. This event was a wake up call, an eye opener, a kick in the pants, or whatever metaphor you would like, either way I am motivated now and feel great!

Christina and I have decided to try and continuously improve ourselves through learning new skills, working on new projects and making a conscious effort not to waste a moment of our lives. The first step for me was to cancel TV service to my house as I have wasted countless hours to mindless shows when I could have been building something or learning a new skill. Each month we are both going to try and teach each other something new though the completion of projects (which I will outline on this blog). I am truly excited for what the future holds, and I recommend everyone take a step back from their daily routine and evaluate if you are getting the most from your life and living up to your full potential.